In this era of boundless skepticism it can hard for us maaminim to maintain our faith in whatever we were taught to believe. From all sides comes evidence that what we believe isn't true and it can be very hard to ignore it all. It helps to have many proofs in hand because even if individually their logic doesn't work, when you put them together it seems like a lot and that works. So, to aid in this cause I'm proud to introduce Intelligent Bending Theory.

Have you ever used a straw? Shame on you! A true ben Torah doesn't drink in such a vulgar manner. Moshe Rabbeynu would never have used a straw despite his burnt lips making every glass a dribble glass, you shaigetz. However, if you've ever been unfortunate enough to see such a prust display of unbridled gashmius, you have already seen proof of your Creator's existence. Take a look this picture: 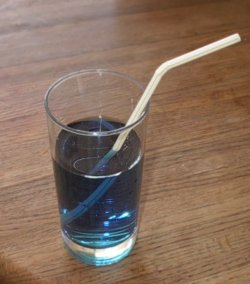 Notice that the straw looks broken, like a yingele's spirit after a good mussar shmooze. What causes this weird illusion? The Almighty of course, and I can prove it! Picture this scenario (by Richard "Dick" Feynman, a widely known Evil Atheist Rosha Scientist):

You're standing on the beach enjoying the Aibishter's spectacular screensaver. Suddenly you hear a cry! Further down the beach someone is drowning. As an ehrlicher yid, you're going to rush to save this person (pretend it's a Jew drowning or that it's not Shabbos.) However, you have a problem on your hands, or should I say feet.

You want to get to the drowning person as fast as possible. You can run on the sand much faster than you can swim in the water, so you're wondering how to most quickly get to the hapless glubber. Should you run in a straight line towards the the drowner (path B), spending more time in the slow water but traveling a shorter path? Or should you run on the sand until you're perpendicular to the drowner (path A), thus minimizing time in the water but traveling farther overall?:

The answer is neither! The formula to calculate the answer is complex and probably requires time in college (chas v'sholom!) to understand, but the fastest path (path C) is somewhere in the middle (but not halfway). Of course, by the time you calculated this best path the person has drowned. However, it might have been a woman anyway which wouldn't have been tzniusdik, so gam zu l'tova.

Now replace the beach sand with air, the water with...uh...water, the straw with the drowner, and remember that light travels at different speeds through different mediums just like your pale legs. The light is you, trying to get to the "sucker" as quickly as possible. Like a bochur leaving yeshiva for bein hazmanim, light always picks the fastest possible route to take. Of all the infinite angles it could take, it takes the best one every time. Not once does it ever pull over to "chap ah mezoynos" in an out of town McDonalds. No, it always stays on the derech. How does light know how to do that? Like a kofer, it has no brains! So how does the light calculate which path will be the fastest? Obviously something supernatural is at work.

Now, some scientists would have you believe that this is a natural occurrence. They might even have a very fancy-shmancy sounding explanation for it. But they are members of E.A.R.S., so you can't believe a word they say. A maamin will see that this proves that all around us guiding every light wave is an intelligence, a being obsessing over every kink in the world. Not only that, but it proves that the same Intelligence gave the Torah! Different colors bend different amounts when passing through refractive media. This is what causes rainbows, and azoy shtayt in posuk somewhere in parshas Noach! Thus, you see from science that the Intelligent Bender is truly the force behind the rainbow, perpetually reminding us of His promise to never again go on a bender, wiping out the world because it got Him bent out of shape.

To everyone who's not bright this proof from lightrays will illuminate your way, keeping you on the bent and narrow. We believers are bent on getting Intelligent Bending Theory taught as an alternative to the atheistic theory of optics being taught in physics classes all over America. Our tayareh kinderlach are being indoctrinated with something invented by someone named Ibn Sahl, obviously not a ohev Hashem! And, unlike that Intelligent Design movement that refuses to say who they think the Designer is, we have no such qualms in the Intelligent Bending movement. All hail the almighty Bender!: 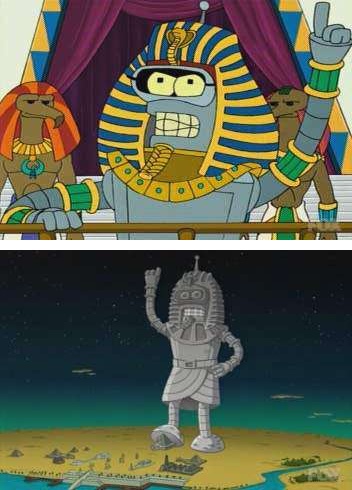 And so I sign off, finished with my duty as DovBear guest poster. From one Bender acolyte to another I say, "Get bent!"
by M-n at 6:28 PM