The old ones will pass... What Weizman really said. 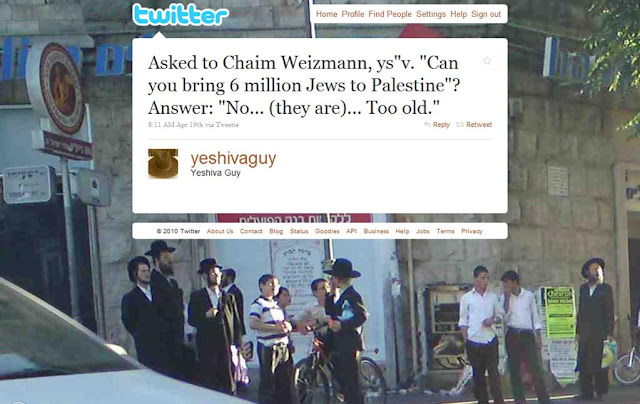 What you see above is the Twitter version of one of the slanderous things said by anti-Zionists about the founders of Israel. Having only 140 characters at his disposal, Yeshivaguy has to be brief. The expanded version of the lie, goes something like this: "At the height of the war, Chaim Weizman was asked if he would absorb 6 million European Jews into Palestine. He said, no. We don't want them. They're too old."

And the truth? What Weizman actually said is as follows:

I told the [Peal] Commission: God has promised Eretz Israel to the Jews. This is our Charter. But we are men of our own time, with limited horizons, heavily laden with responsibility towards the generatiosn to come. I told the Royal Commission that the hopes of six million Jews are centred on emigration. Then I was asked" But can you bring six million to Palestine?" I replied, "No, I am aquainted with the laws of physcis and chemistry, and know the force of material factors. In our generation I divide the figure by three, and you can see in the the depth of the Jewsish tragedy: two millions of youth, with their lives before them, who have lost the most elementary of rights, the right to work.

The old ones will pass, they will bear their fate, or they will not. They are dust, economic and moral dust in a cruel world. And again I thought of our tradition. What is tradition? It is telescoped memory. We remember. Thousands of years ago we hears the words of Isaiah and Jeremiah, and my words are but a weak echo of what was said by our Judges, our Singers, and our Prophets. Two millions, and perhaps less. Sche'eirt Hapleta - only a remnant shall survive. We have to accept it. The rest we must leave to the future, to our youth. If they feel and suffer as we do, they will find the way. Beacharit Hayamim - in the fullness of time.

Sounds a little bad, I admit. Only, like the anti Zionists, I left out one important detail: Weizman said this in 1937! 1937! This was before the Final Solution, before the War, before the invasion of Poland. At the time, no one dreamed that Hitler posed a mortal threat to every Jew on the continent. Weizman's use of the number 6 million was just an unfortunate coincidence. What he is saying here (again, the year was 1937!) is that the old Jews of Europe are set in their ways, comfortable in their homes, and unlikely to emigrate. He's not saying  (as the anti-Zionists claim) that they are unwanted, or that they are to be abandoned to Hitler's as yet unimagined ovens. He's merely speaking realistically about Palestine's ability to absorb Jews, and about the likelihood of Europeans Jews to emigrate. He has not rejected an opportunity to save Jews, which is what the dishonest anti-Zionists claim.

Something else the dishonest anti-Zionists forget to mention: In the same speech, Weizman outlines a plan to accelerate the rate of immigration to Palestine by 150 percent. When he says "the old ones will pass" he means only that they aren't likely to be among those who come to Palestine, and become part of the Jewish future.

Search for more information about lies Satmar Hasidim and their useful idiots tell at 4torah.com.
by DovBear at 6:55 AM