The problems of Orthodox Jewry in one picture 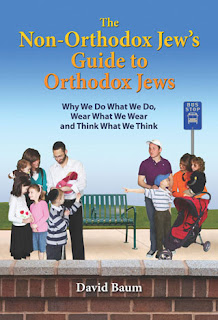 Someone on twitter posted a link to this book saying it is interesting. I went to the link and read the table of contents, introduction, and the first chapter (which is provided on the book order page). It seemed interesting, and perhaps is a worthy idea to help bridge the divide between Orthodox Jewry and non-Orthodox Jewry. And if not quite "bridge", at least explain the divide somewhat.

But then I suddenly realized that the cover alone illustrates a different divide, a divide between the different groups of Orthodox Jewry. Looking at the photograph of the book cover, I realized that the family on the right is what the book is referring to as the non-Orthodox family and the family on the left is the Orthodox family. And then it struck me, MY family looks a lot like the one on the right (except with more children, and me and the boys usually wearing shorts and sandals)! Do they, certainly the author, think that my family is not Orthodox?

And the cover really does say it all. The family on the right is very likely to be completely Orthodox and is what is commonly called Modern Orthodox. It is clear that the man and boy have their heads covered, and the woman is dressed modestly (from what we can tell in the photo). The author could have certainly picked a MUCH better illustration of a non-Orthodox family if one was really needed for the cover of his book. Even the verbiage on the cover shows that the author thinks that all Orthodox Jews do the same things, wear the same clothes, and think the same thoughts. And that is definitely not universally true. We surely share the same beliefs about many things, we all follow the mitzvot that God commanded us, but we DO NOT all dress alike, do not think alike, and so not all do the same things. Sorry David Baum, the book may be great, but the cover stinks.

DB: Update: The chapter on homosexuality also stinks. If this account is accurate, the book and its author are completely discredited.

Search for more information about how to get your guest post published on DovBear at 4torah.com.
by DovBear at 7:18 AM