Chaim Berlin shows us just how important the truth is

Like seemingly every other blogger of note, I, too, received an email from Mordy Ovitz, editor of The Knish, about the latest shenanigans at Chaim Berlin.
In brief:
Last year the Chaim Berlin calendar carried a picture of their bes medrash on the cover, only, uh oh, a student in a blue shirt could be seen at the bottom left corner, alone in a sea of students dressed in white. [My post about this from last year] 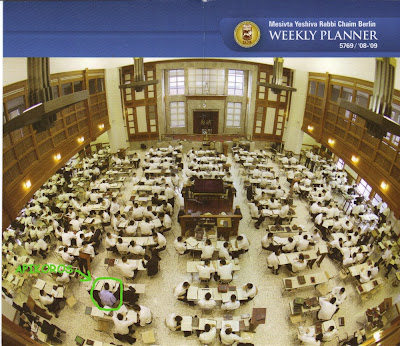 This year, Chaim Berlin put the same exact picture on the cover of their calendar, only now, the blue shirt wearing student is also dressed in white. 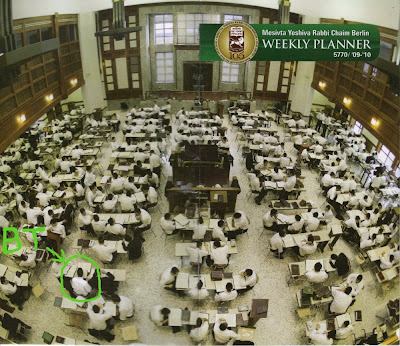 Harmless? Hardly. This is history done charedi style. Rather then show us what happened, Chaim Berlin prefers to manipulate the facts to fit some pre-conceived notion of the ideal. In their imagination land blue shirts are krum, or inappropriate, and the fact that some Chaim Berlin students wear them must not be revealed. This is categorically the same as letting your kid think Moshe wore a shtrimel, or pretending that every shtele dweller was a scholar and a prince.
The other blogs are making silly jokes about how the student "did teshuvah" but I see nothing funny about Chaim Berlin's sin. And make no mistake, I think the error is grave. With one click of the mouse, they airbrushed a student's shirt and announced themselves, as cowards, frauds, liars and conformists. I don't see how any parent can continue to trust that school. What parent with half a brain would send his son to be taught by people who cavalierly delete inconvenient facts? And why would you wish to associate yourself with a place that judges a blue shirt something that ought to be hidden?
Source: An email from The Knish
Jacob Da Jew: Chaim Berlin Apikorus Does Teshuvah!
OTML: Chaim Berlin Apikorus Does Teshuvah!
UPDATE: Hedyot nails it: The really amazing thing about this... is that it undermines the very basis of the OJ belief system - that we can trust what our parents told us and they can trust what their parents told them, etc. If it's been proven that the institutions and individuals entrusted with transmitting the mesorah are willing to lie in order to promote a false historical record, what does that say about the veracity of the mesorah?
by DovBear at 8:56 AM