Our text today is the eighth verse of the twentieth chapter of the book of Deuteronomy, where War Officers are instructed to send home any man who is "Fearful and Fainthearted"


And the officers shall continue to speak to the people and say, "What man is there who is fearful and fainthearted? Let him go and return to his house, that he should not cause the heart of his brothers to melt, as his heart.

Reading this verse, R.Yosi spots a difficulty, a difficulty that only registers for those who come to the verse with a pre-existing theological belief about the causes of death. R.Yosi, as we will see, believed that men only die through their sins. In light of this belief, the verse makes no sense: Why is the soldier afraid? He knows he serves the God who defeated Pharaoh. He knows that through God all things are possible. Perhaps he even knows the Rabbinic interpretation of Joshua 7:5 where astonishment is expressed that worthy and righteous Joshua lost as many as 36 soldiers to the men of Ai. And most importantly he knows that the righteous enjoy divine protection, and have no fear of random, undeserved deaths. So what about going to war can possibly frighten this soldier? R. Yosi's solution is the following interpretation:


[it means] one who is afraid of his sins [that they will cause him to fall in war, as he is unworthy], and therefore, the Torah gives him the excuse [in Deut 20:5 ff] of attributing his return home because of a house, a vineyard, or a wife, to cover up for those who return because of their sins, so that people should not understand that they are sinners. [Consequently,] one who sees this person returning would say,“Perhaps he has built a house, or planted a vineyard, or betrothed a woman.” [Sota 44a via Rashi]

Now this solution, of course is forced, and leaves us to wonder why three cover story exemptions are needed, when one would suffice. Still, it shows us the rabbinic imagination at work. R. Yosi is so certain that men die from sin only (and so sensitive to human dignity(!)) that he proposes every war exemption is nothing but a facade to protect the feelings of a sinner.

Also interesting is the interpretation of Rabbi Akiva, who seems not to share the belief that men die through sin alone. Contra R. Yosi he reads the verse this way:


[This verse is to be understood] according to its plain meaning, that he cannot stand in the closed ranks of battle and look upon a drawn sword.  [Sota 44a via Rashi]

R.Akiva, we can see, does not share R. Yosi's confidence that death is always caused by sin. The soldier is not frightened he may die because of his sin, but because he is facing drawn swords in close quarters, and sin or not, this may kill him. As a result, R. Akiva doesn't recognize R. Yosi's difficulty, and has no need for his interpretation.

Their disagreement, of course, occurred back when it was still acceptable to claim that men occasionally die undeserved deaths simply by virtue of being caught at the wrong time, on the wrong battlefield. As anyone who has been to a shteeble or seminary knows, that idea is currently out of style. Now, we practice "No Coincidence Judaism." Every death is deserved, we're frequently told,  and no one ever dies before his time. So what do we do with R. Akiva, who seems to have had a different view? Easy. We reinterpret him as well. Here's the "current" Rebbe of Lubovitch in a Sicha quoted in the Gutnick Edition of the Bible: 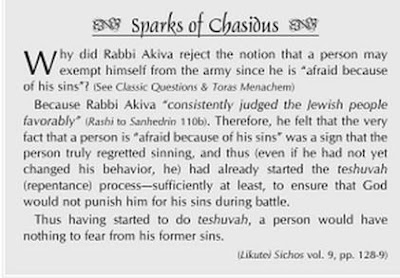 As I understand it, the Rebbe is taking it for granted that R. Akiva shares R. Yosi's belief about sins causing deaths. (This is called "begging the question". I point this out because Gutnik misuses the phrase on about every third page).  So the argument between R. Yossi and R. Akiva is not about what causes death, but about what qualifies a person for an exemption. As the Rebbe understands it, R. Yosi excuses people who are afraid due to sins, while R. Akiva does not. Only people who are afraid of fighting are permitted to leave, while those who are afraid because of their sins must stay, because their fear is a sign that the Teshuva process has begun, a process that offers protection.
Really, very clever, no?
Search for more information about acrobatics lshem a pre-existing cherished idea at 4torah.com
by DovBear at 7:47 AM

All you see is that Rabbi Akiva allowed that there may be some soldiers who fear dying for no reason while Rabbi Yosi could not fathom someone holding such a belief to be there at all. There is no indication as to Rabbi Akiva's beliefs.