they come to the defense of the kannoim

A Guest Post by Rafi G.
(cross posted from LII)

How many times have we heard that the kannoim are loose cannons that just don't listen to anybody? The Rabbonim, when asked why they do not reign in the thugs who make trouble and use violence, respond that these guys just don't listen - they claim to have no influence over them.

Here is what I think about that.

On Sunday night, one of the kannoim in RBS B was arrested. Among the reasons was the fact that he had been throwing bleach at women shopping in Geula. This should be a good thing, right? Possibly a deterrent against his perpetrating future violent attacks, right? It turns out that one of our elected representatives, a rep from Degel, has personally intervened to have this poor fellow released from incarceration. These kannoim don't even vote, so the elected officials first priority should be protecting his electorate and their interests, and only afterwards assisting others. He should be working to stop these guys from attacking his voters, but instead he makes sure they do not have to sit in jail. 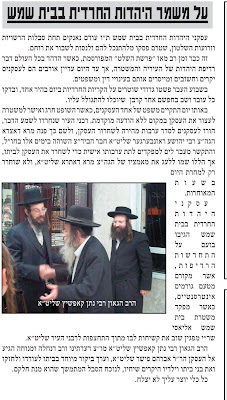 Another case in point is what you see in the article to the left. I clipped this article out of the most recent edition of the newspaper of the Eidah Charedisi called "Ha'Eidah". It describes how a certain Haredi "askan" (Sholom Fisher, one of the kannoim) was arrested recently for no reason. A different "askan" was on trial, and they decided to send out an order to arrest Fisher. He was picked up that day and arrested.

The Rabbonim were horrified and worked very hard to have him freed. Rav Rosenberger gave his personal gaurantee in order to have him released to house arrest. Rav Kopshitz, pictured in the article, even went to Fisher'ss house to visit him and give him support and strengthen his morale.

These are Rabbonim who, when asked why they do nothing to stop the violence, simply say they have no influence with these guys.

You tell me - is that true? Do they have no influence or do they really support them and their thuggish behavior?

Nobody wants, in a frum neighborhood, problems of tzniyus. Do we try to influence them positively or do we really just want the opportunity to attack them?

When some say they have no influence with the kannoim, are they just making up an excuse so we will leave them alone?

When our elected officials actively work on the behalf of the kannoim instead of their electorate, whar are they telling us?
by Rafi G. at 7:14 AM